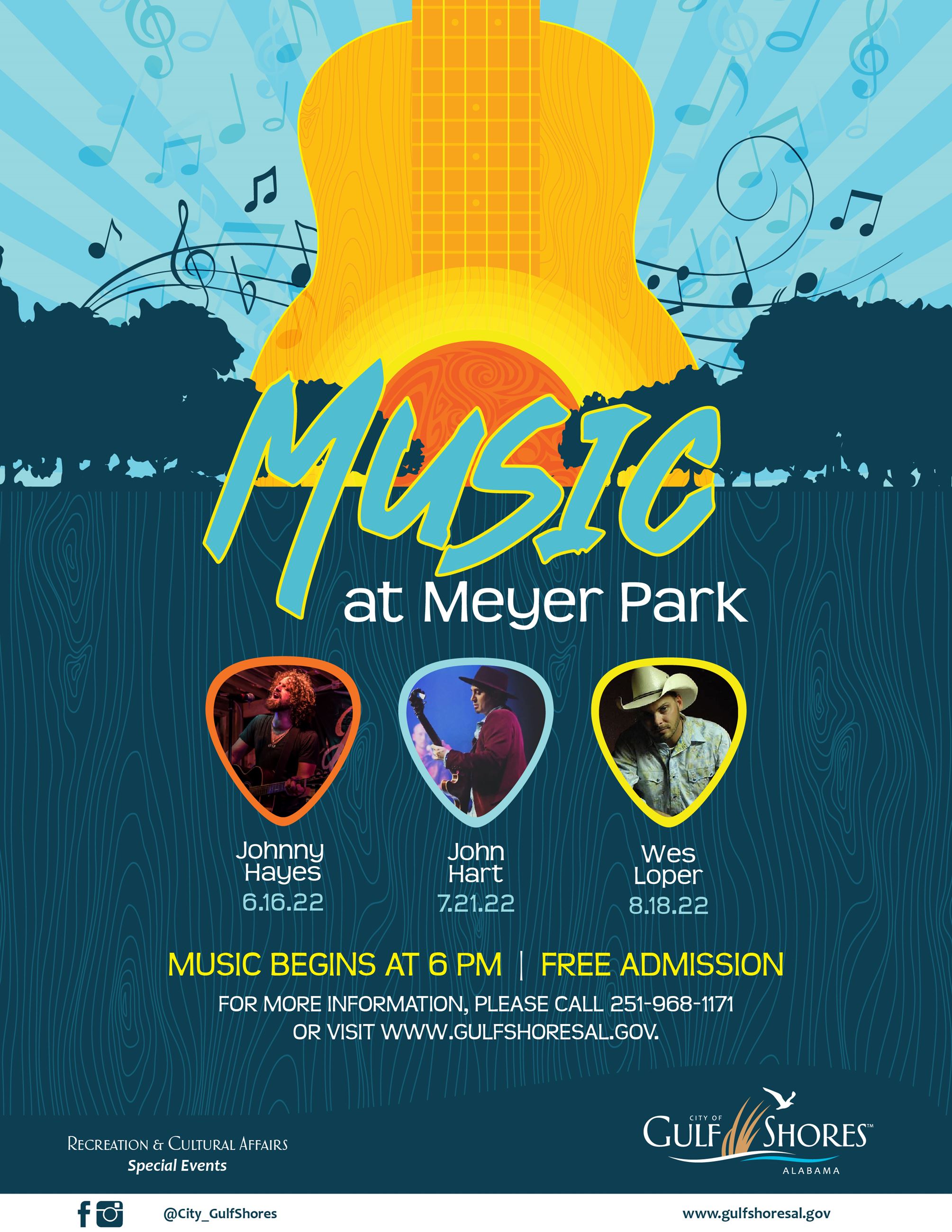 Grab your friends, family members, and a blanket or lawn chair and join us at Meyer Park for our Music at Meyer Park concerts. These concerts are free and open to the public. Shows begin at 6 p.m. at Meyer Park, which is located at 400 E. 22nd Ave. These are rain or shine events. In the event of rain, the back-up location will be at the Big Beach Brewery.

Food trucks will be set up at each show for those wishing to purchase food, and the Coastal Alabama Business Chamber will be selling beverages for all ages to enjoy!

Johnny Hayes
Before you saw Johnny Hayes singing on The Voice or opening for artists like JJ Grey & Mofro or Daniel Donato, he was a doorman at a bar in Tuscaloosa, AL while attending The University of Alabama. One evening while the musician on stage took a break, Hayes played a song and decided he'd much rather be doing that. Although green as can be, he began playing at venues immediately. After graduating from the University of Alabama, Hayes moved to Nashville, TN and started a band called Johnny Hayes & the Loveseats.

John Hart
Florida-based artist John Hart is an acclaimed guitar player along the East Coast and Gulf Coast. Leading up to his creation of the John Hart Project, Hart spent a few years touring the East Coast with the prominent Sauce Boss. The warm, rich tones of Hart’s classical guitar playing approach brings an exciting and fresh presence to his live shows, while his unique weaving of fingerpicking and blues influence brings a flavor to the sound like no other. Revered as a young man beyond his time, John’s influences come from a mix of blues legends such as Muddy Waters, and B.B. King, to rock legends such as Jimi Hendrix and Duane Allman to modern monsters such as Derek Trucks and John Mayer.

Wes Loper
Wes Loper was born in Mobile, AL and raised in and around the warm waters of the Gulf Coast. With well over 4,000 live performances, Loper knows how to entertain a crowd. He has a way of blending music genres that has fans opening their hearts and cheering for more. Mixing Rock, Country, Blues, and Folk, Loper finds common ground with the audience and delivers his tunes with a positive spin until everyone is singing along with the music. He travels far and wide to bring his music to others. His shows are exciting, his voice is outstanding, and his fans are never disappointed.

For more information about Music at Meyer Park, contact the City of Gulf Shores Special Events Division at 251-968-1171